Yes… the YYZ gallery put on an increadable show with a horribly complicated name.
I_wanna_see_YOU_ is a show created by 4 Dutch artists who came to Toronto and built an exhibition around their preceptions of Toronto and Torontonians.

This piece was fantastic. Postcards from around the world, with TORONTO printed on each one in the direct center of the card. Perhaps a comment on our brilliant multiculturalism, perhaps a comment on our diverse landscape, its true, from the Danforth’s Greektown to College Little Italy, from the rolling landscape in the Don Valley to the metropolis Yonge and Dundas Square, Toronto is a mosaic of a post card! 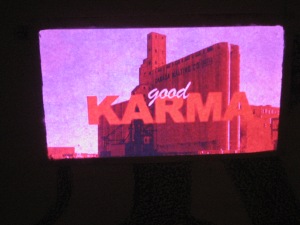 Apparently Toronto is filled with positivisms and happy slogans. GOOD KARMA FOR EVERYONE!!! A digital film in the wall that flashed GOOD KARMA over a rapid shot of landscapes and still images. 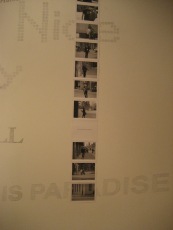 This was a wonderfully light hearted look at a city that I have been away from for so long. This may ring slightly Sofie Calle, but feeling like a foriegner in one’s own home since my very recent return to Toronto, this was a welcoming exhibition.