Marc Séguin is an ArtJetSet favorite, whose career we have watch since 2008.  His masterful grisaille technique combined with layering of think pigments and taxidermied animals is visually beautiful while emotionally challenging. 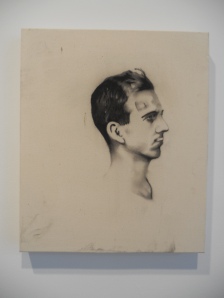 For Séguin’s first solo show at the Mike Weiss Gallery titled Failures, he exhibited portraits of political figures and destroyed chruches. We have seen his earlier large scale works that depicted political and religious figures (click HERE and HERE to see the other ArtJetSet posts), and now we see his portraiture scaling down in size which emphasizes the theme of failure of these iconic figures.

By contrasting personalities like Lee Harvey Oswald, the Pope, Russian billionaire Roman Abramovich, and Nazi soliders, the message is a persistent narrative of the failures in the hands of the powerful.