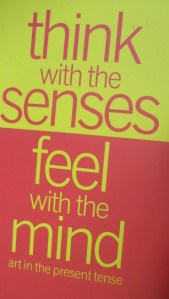 The Venice Biennale, title theme THINK WITH THE SENSES FEEL WITH THE MIND, curated by Robert Storr.

The biennale is divided into two main playgrounds, The Arsenale – a series of connected warehouse spaces VS the Giardini where each country has a house in which they present their most acclaimed artist.

Storr quotes as saying the theme is to present the dichotomies between the perceptive and the conceptual, between thought and sentiment.

Emily Prince portrait drawings of US military killed in Iraq, hundreds of id sized photos climb the wall like a world map.

Paolo Canevari Bouncing Skull Short video of a young boy playing soccer , shot from a ground – up perspective. Seemeingly mundane, until you realize in place of a football, he is dribbling a human skull.

For the most blatant Momento Mori, Jang Zhen Zhang’s large screen video installation. 8 massive screens, showing diversity – various settings in the streets or in homes, women men young old, every language in every intonation all repeating the same phrase – “I Will Die”.