In a recent visit to the Tate Modern, there are almost interesting nouveaute!!

I really liked Dieter Roth’s 6 Piccadillies (yes, I liked these 4 of the 6 the best). An interogation of different ways of representing and painting the same scene.

Steve McQueen’s Drum Roll. McQueen won the Turner Prize in 1999. This inovative video he put 3 video cameras in a steel barrel and rolled it through the streets of New York City. Negotiating our way through a fractured and chaotic urban space. 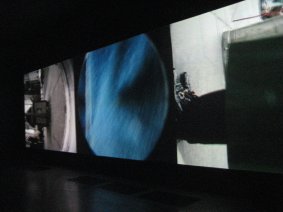 I saw Cheri Samba’s works for the first time at the Venice Biennale. Using acrylic paint, in a response to billboards, signs and comic strips, Samba tackles serious socio-political issues in Africa with his artworks. A humoristic yet conflictual discussion of politics and evolution in African art and society.