Chadwick Tyler and Paul Rowland are editorial photographers bringing their glam fashion photographs out of the magazines and temporarily taking over bankrupt gallery spaces to host crossover exhibitions.

Walking down 11th Ave at West 21st St there is a white wall with a cutout entry… SUPRISE, yes Alice in Wondeland… it is a narrow doorway to the HoneySpace.

Tiberius is Chadwich Tyler’s exhibition. He said the title is a word he likes, because it could be a place, a clan, a harem, a community.
30 black and white photos are hung salon style, with ornamented frames painted the same egg shell colour as the walls. The images are of beautiful young models in a dark dirty vaudeville-esque narrative. They are active, pensive, often smoking cigarettes.

The didactic material reads like a magazine call sheet, where the stylists, make up assistants, and models are all thanked by name.

A few blocks later we find a recently bankrupt art gallery which is has become temporary exhibition space for Transformations by Paul Rowland. 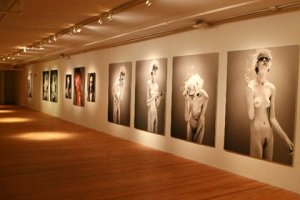 Rowland created Women Management, a modeling agency with a mission to explore visual perception by finding talented models that could transform into a character that would engage and stimulate the viewer, and create a real meaning behind the image.
Transformations is a survey of Rowland’s photography which was first shown during the Miami Art Fair, and now in this temporary space in New York.
Very large format photos are beautiful young fictional versions of Diane Arbus characters.