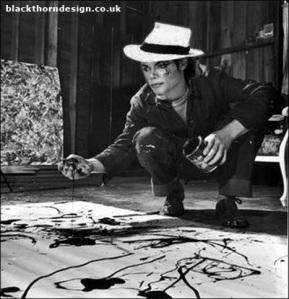 Invisible Exports presents a hilarious video program negotiating the consequence of television struggle between high and low culture. Curated by Mike Bouchet, the program consists of works by a roster of contemporary artists interwoven with segments and episodes swiped from digital cable. Throughout the show, the work will be continuously replenished with new videos and new content from network programs, a democratic gesture that raises questions about influence and audience, scope, depth, and quality in the narrative arts.
As the world mourns the loss of King of Pop, Michael Jackson, IE presents a very poignant video Mr. Michael Jackson Pollock by Marco Schmitt. The clip is of the artist disguised as Michael Jackson, moonwalking and dancing while drip and splattering a canvas à la Jackson Pollock. (nb this is not an image from the show!)