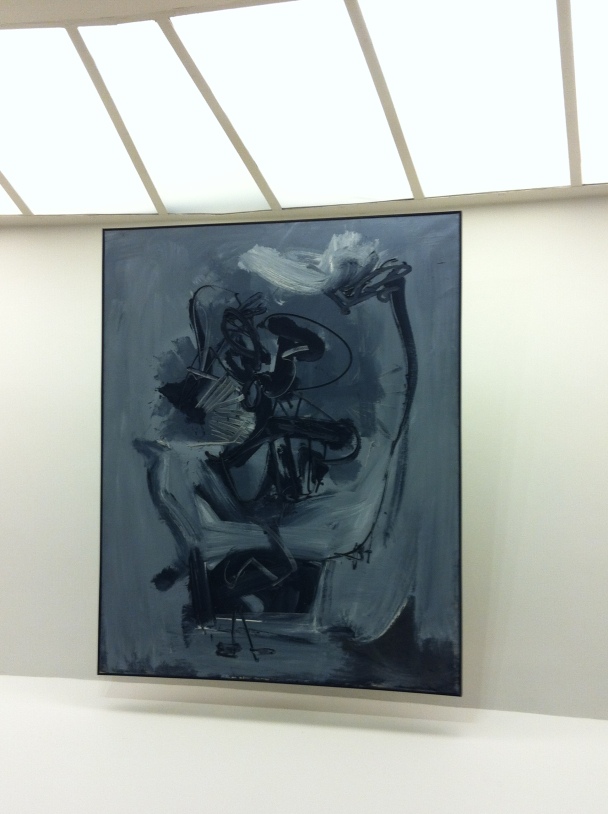 Art of Another Kind is a sweet tribute to the Frank Lloyd Wright Guggenheim‘s inaugural show.  As the then new Gugg was opened in 1953, this show highlighted the pivotal works that were collected by then director James Johnson Sweeney.

As a big fan of Ab-Ex, I really liked this show for exhibiting the complexity and expansiveness of the non-representational movement; from the movement’s famed heroes like Rothko, Klein, Pollock, to the flat panels of Ellsworth Kelley, the raw textures of Tàpies, and the expressive gestural strokes of Soulage.

The one thing that stood out more than Hans Hoffmans bold colourful paintings, was the cursive script font used for the wall labels.

Of course, I thought this was a visceral inside joke some kind of double-entendre allusion to Greenberg’s assertion of the gestural’s importance in pure painting.

Or rather a mimic of swooping brush strokes on the canvas as purported into text to contrast the conventions as the Abstract Expressionists did in their era.

Shout out to gallery guide Jeff, who explain that as this show is a tribute to the 1956 Guggenheim show, the wall labels were in fact recreated in the style that they were originally done at that time – in the cursive font.   ArtJetSet we love nostalgia.